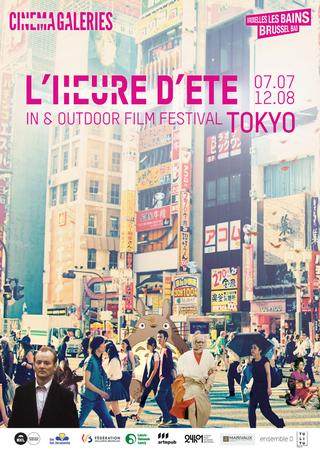 For this edition, about fifty films will be shown during the festival, highlighting Tokyo city and japanese cinema.

For this edition, about fifty films will be shown during the festival, highlighting Tokyo city and japanese cinema.

Every year, in partnership with the Brussels City Council and the Brussels Capital Region, CINEMA GALERIES chooses an international film city and programs a selection of films that allow you to discover its unique atmosphere. For this edition, about fifty films will be shown during the festival, highlighting Tokyo city and japanese cinema.

If Takeshi Kitano and Yazujiro Ozu are leading figures when it comes to representing the capital in cinema, they are not the only ones to immortalize the city on the big screen.
Once again, this open programation will be concerned with understanding the city through the films of great authors as well as through popular cinema and its original facets.

Fifteen of these exceptional screenings will take place outdoors on Bruxelles les bains site, the others will be shown in CINEMA GALERIES. From July 7 to August 12, there will be no less than 30 screenings, 15 of which will be open-air and free of charge on the site of Bruxelles les bains.

A film-concert to give voice to the “Kids of Tokyo”. Sylvain Chauveaux, Joël Merah and Stéphane Garin and their delicate music will take you to discover Keiji and Ryoichi whose family has just moved to Tokyo. Victims of school bullies, their father pushes them to go back there to get some respect…

The OPERA CAPTURE CLUB workshop proposes to rethink the KARAOKE (empty orchestra in Japanese) through the medium of video. During this workshop we will try to propose a participative performative format.
“Let’s question the voice, the dubbing, the live, the video and the subtitles, out of field, out of rhythm, let’s multiply the screens. Let’s give life and soul to our little technological objects of everyday life, what relationships are established on stage between humans and these “robots”, let’s observe the screens and listen to what they have to tell us…”

The festival aims to take the audience to discover the city through a selection of films that have been shot in Tokyo or in Japan and that are directly related to the culture of the country.

A focus will be made on Studio Ghibli movies, the films of Takeshi Kitano and also Yakuza and samurais movies (when Tokyo was still called Edo).
Through the selection of films proposed on Tokyo and, more broadly the great names of Japanese cinema and foreign directors that the city, the country, the culture have fascinated, Cinema Galeries proposes to discover the great themes of Japanese cinema:

“Family portraits: from Ozu to Kore-eda”
“Western fascination: when we get lost in translation”
“Japanese fantasy cinema: war trauma and watery terrors”
“Samurai and Yakuza between good and evil: from Tokyo Drifter to Zaitochi”
“Japanime: between animism and cyber humanism.”
“Woman in Tokyo”

CINE-CONCERT | 13.07 I 19:00 / Film-concert to give a voice to the “Kids of Tokyo” with music by Sylvain Chauveaux, Joël Merah and Stéphane Garin.

OPERA CAPTURE CLUB | ATELIER/STAGE : A proposition to rethink the KARAOKE (empty orchestra in japanese) through the medium of video. Information & reservation : operacaptureclub123@gmail.com

KIDS I Several youth audience will be programmated in the morning. Discover the upcoming program every wednesday on our website !

BOOKSHOP I In partenership with TULITU library.