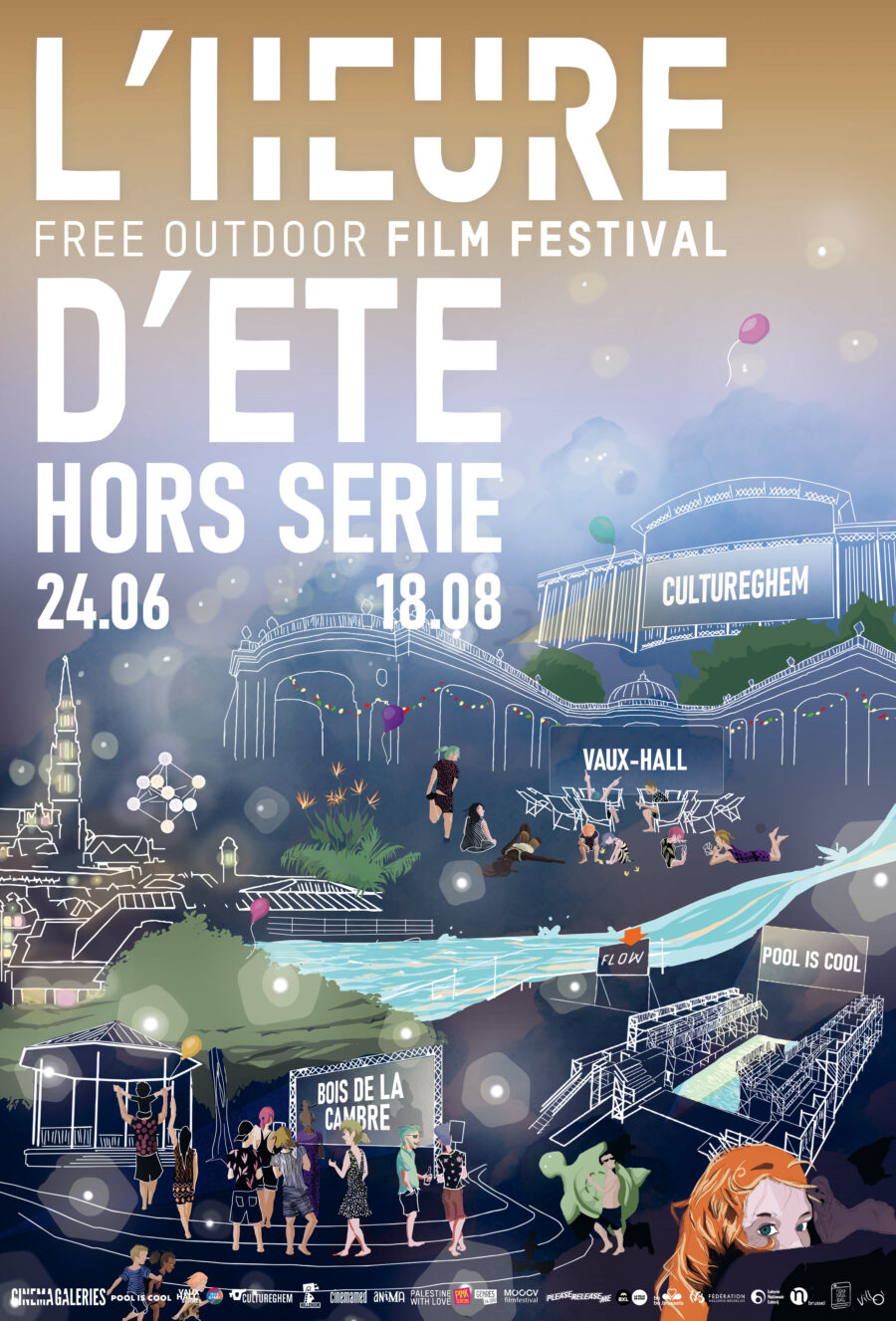 For this special “hors série” edition of our annual L’heure d’été festival, we will this year focus on multiple cinematographies: a cinematographic archipelago in various Brussels public open air spaces that we will take over for the occasion.

For this special “hors série” edition of our annual L’heure d’été festival, we will this year focus on multiple cinematographies: a cinematographic archipelago in various Brussels public open air spaces that we will take over for the occasion.

In order to pursue our mission of renewing and giving other voices to the Brussels cinematographic landscape, the Cinéma Galeries is driven by the desire to show a plural cinema to an increasingly varied public.

In line with our Summer Hour festivals, this year we are presenting a special edition that will highlight the unusual spaces that host cultural activities in Brussels, while giving maximum prominence to films or events that have not been able to achieve the expected visibility due to the covid-19 pandemic.

These spaces, whether they are a park, an ephemeral swimming pool, or a historic market, are all places that do not fit into the classic representation of the cinema. They allow us to show the 7th art from another angle, which seems to us to be all the more important in view of the way in which films were seen during the pandemic. In addition to the return to theatres, these spaces provide an even greater breathing space for films that have essentially been seen online or at home since March 2020.

These off-track and scattered locations in the city will allow us to show a different cinema, invisibilised by the crisis, in a variety of environments. We hope to see many of you and create encounters that will celebrate the multiplicity inherent in cinema!

We see each of these places as islands where we can meet again and exchange ideas around a cinematographic archipelago constituted by these spaces of breathing and meetings. We will animate them through open-air screenings in collaboration with the Vauxhall, Cultureghem and Pool is Cool as well as in the Bois de la Cambre.

At the Vauxhall, it’s our partner festivals that we’re celebrating every Thursday from June 24th to August 12th. After they have been online, we wanted to invite them to come and meet their audience!

You will be able to see Millenium with L’homme qui cherchait son, Belgian short films by Anima in the presence of the directors. The Pink screens festival will present the premiere of Le Milieu de l’horizon in the presence of Delphine Lehericey, its director. The Cinemamed festival will present 200 meters, a favourite of its festival. We will also showcase For Sama, Undine and Atlantis, which were released directly on VOD and which we want to allow to be screened on the big screen.

From 22 to 25 July, we will be taking over the Bois de la Cambre at the carrefour des attelages for four evenings with films on the theme of the forest. Come and enjoy these free open-air film experiences !

We will be programming three screenings at the abattoir market on 9, 10 and 11 August with three screenings accompanied by a themed meal in collaboration with Cultureghem and the Dream Kitchen, a free kitchen that recovers unsold food from the market to make accessible meals while fighting against food waste.

Cultureghem works with the abattoir market to create a deep social link with the local population and wishes to continue around cultural and artistic activities, so we will propose several free outdoor screenings, in partnership with the Dreamkitchen for 3 ciné-repas!

FLOW – Along the water

From 14 to 18 August, we will be hosting FLOW, an ephemeral summer swimming pool set up by Pool is cool in collaboration with Decoratelier on the banks of the canal in Anderlecht on the Biestebroeck quayside, during a week of free outdoor cinema on the theme of water and swimming.

This pool will be open every afternoon, to everyone and for free.
This space has the ambition to be a prototype for future swimming places, proving that outdoor swimming is necessary and possible in Brussels! Although the debate has been going on for years, last summer, with thousands of families unable to travel, access to leisure facilities became even more important…
Shared public space gives oxygen to the inhabitants, in this sense FLOW wants to be a real space of connection with the neighbourhood, its inhabitants and a wider public, and it is in this sense that we join other cultural activities organised by Kunstenfestival or Zinnema to create a collective ground of exchange and sharing.

We want to occupy all these summer spaces throughout the summer, from 24 June to 12 August, on a regular basis, to establish a lasting collaboration with the partner associations we will be working with. But also, and above all, to provide numerous opportunities to forge links between different audiences, whether they are experienced film buffs, children discovering their first films or young people embarking on the exploration of cinema, so that together they can see cinema in a different way.

This multitude of free outdoor film screenings will be, in the manner of a festival spread throughout the city, a way of reconnecting with this splendid archipelago that is cinema as it is shown in Brussels and accessible in all its forms!