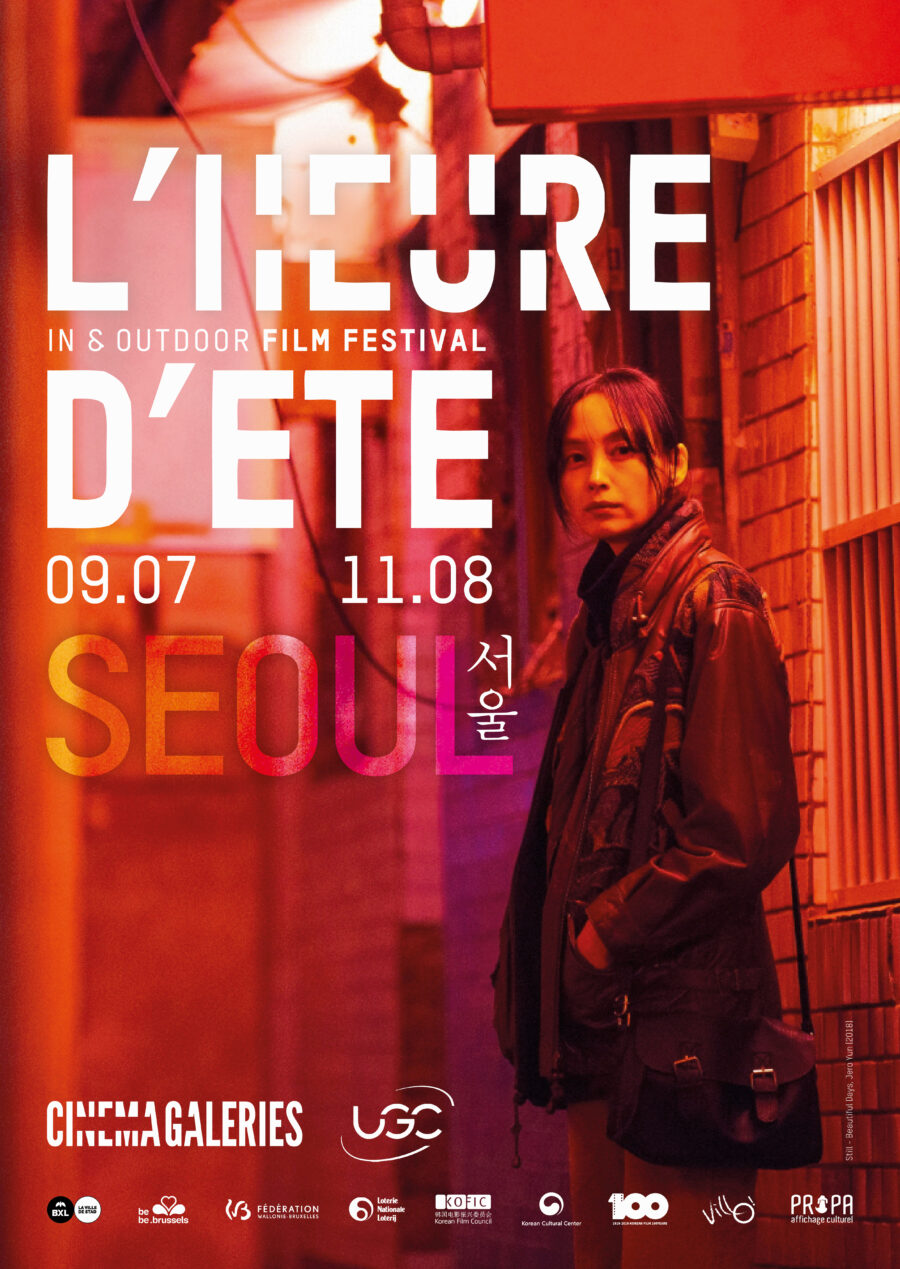 InformationBecause of a technical problem, the screenings in room 1 are cancelled today, 30th June

Driven by the desire to decompartmentalize genres and to offer a selection of quality in exceptional settings, CINÉMA GALERIES offers with L’HEURE D’ÉTÉ : SEOUL, the eighth edition of its annual indoor and outdoor festival.

For this new edition, in collaboration with the Korean Cultural Centre, the Deputy Mayor of Culture of the City of Brussels and the Région de Bruxelles-Capitale, the Festival L’HEURE D’ÉTÉ will celebrate the 100th anniversary of Korean cinema by exploring Seoul and more broadly South Korea and its many lesser known aspects….

Seoul has experienced an impressive population growth, from 300,000 inhabitants in the 1920s to 20 million in 2018. Today, it is the capital of one of the world’s greatest economic powers. Its inhabitants live at a frenetic pace and work more than sixty hours a week, in average. In Seoul, you can have a domestic animal cloned, live your own funeral, and one in three women has already had plastic surgery.

Between yesterday and today, between the city seen by Hong Sang-soo (The Day A Pig Fell Into The Well,The day he arrives) or by Jeon Go-woon (Microhabitat), Seoul has not only been transformed, but the cinema also enjoyed making it play different roles that reveal its changes over the course of History. The L’HEURE D’ÉTÉ program will explore how Korean cinema has made this city with unique atmosphere a multifaceted actor…

The Festival will have the honour of welcoming director Kim Jee-woon (The Good, the Bad, the Weird, A Tale of Two Sisters, I Saw the Devil) for the opening night on July the 09th at UGC De Brouckère and also for a Masterclass on July the 10th at CINEMA GALERIES. A retrospective on Bong Joon-ho (The Host, Mother, Snowpiercer) representative of the new wave of South Korea and the first filmmaker from his country to win the Palme d’Or in Cannes last May, will also be organized.

L’HEURE D’ÉTÉ also offers you a selection of Thriller movies, the South Korean capital often serving as a background for this kind; a selection of engaged documentaries directed by women; meetings with the directors; the diptych White Night and Night flight by Lee-song Hee-il, two queer melodramas in which the city of Seoul, magnificently filmed at night, appears as a character of its own.

The Festival consists of a programme of 31 films, 9 of which will be screened in open air; but also an exhibition of South Korean artists Steak Films, and a film-concert by Ensemble 0.

OPEN AIR I An open-air cinema experience that has become a key feature of the Brussels summer
In case of rain the projections will be moved to the Cinema Galeries.